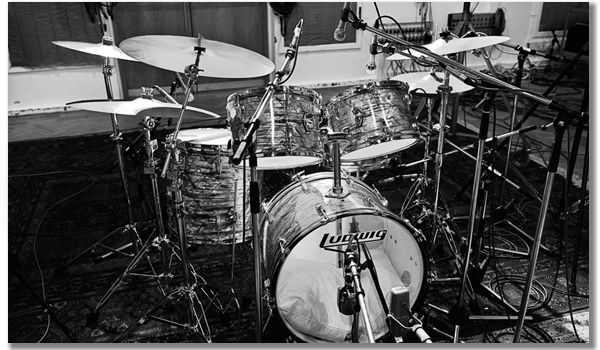 That sound is not made with any acoustic simulation or modeling, but consistent samples of two authentic drum kits from the 60s and in the studio he recorded the Beatles, Abbey Road Studio 2.

All samples were recorded at Abbey Road Studio 2, renowned as the Beatles worked in this room, but also because this studio has been home to many famous artists such as Fiona Apple, Nick Cave, Dido, Green Day, Muse, Oasis, Coldplay , U2, Rediohead, Kanye West ...and the list extends even more...

These samples as well as being recorded in the same room with all these artists used also used the equipment and drum kits of the time. All this together with the Abbey Road, the first partnership between Abbey Road and Native Instruments.

These samples were recorded with special microphones from that time, including Sony C38A, Neuman U47, KM 56, AKG D20 and d19. All this was connected to a REDD table for mixing, and sent on channels for a Studer J37 4 tracks and 1 inch wide tape.

Of course, all this at one point had to come to the digital world, and from the tape recorder, all recordings out converted to digital by Prism ADA-8 A/D.

Two different types of drum kits were recorded and are available in samples. Close 60s, the Gretch Round Badge with Jasper Shells and after 60s, the Ludwig Hollywood kit.

The Gretch is composed of four parts, having a bass drum 24", and colors of 13" and 16". This was combined with a Ludwig Jazz Festival box and Ludwig Mohogany box to round.

The Samples and Controls

Within the interface you can do almost anything imaginable with the samples.

You can set the pitch, the volume of the envelope and the overhead microphones and the room, mixing each component separately, in addition to the balance between the upper and lower box microphones. You can change the articulation of each Drum, allowing you to add borders, different types of snare hit and other realistic effects.

There are also a couple mixer as a whole kit, which allows you to mix the different elements of the kit, as you would in the analog world ... Mixing elements directly from the microphones, as well as the room and overhead mics to get the tone that you wish.

All samples were transported to the Digital World in 24 bits and 44.1 kHz, and there are over 30,000 samples! Including but not limited to, 30 drum-velocity layers, 6 variations of each beat, and different samples of right hand / left to the snare and to the high hat.

This sample library has a monster size 14 GBs and works both in the paid version and the free version of Kontakt 4. It is available for $119.00 US Dollars in the United States.